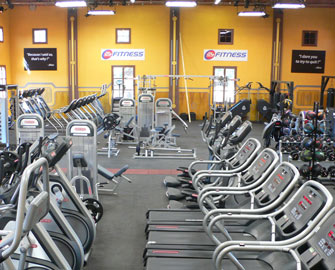 When you think about it, a treadmill is basically a short conveyor belt system. Therefore, exploring the history of treadmills and rubber treadmill mats and their evolution requires an examination of early conveyor belts. As you will learn in the following article, treadmills and rubber mats for treadmills are direct by-products of the flourishing American automotive industry of the early 20th century. However, their evolution even dates back to early conveyor systems devised by the Greeks. Treadmills have become an integral part of our fitness culture—so much so that a gym without rubber mats for treadmills is no gym at all!

We can trace the treadmill’s roots back to the oldest known conveyors, the “Archimedes’ Screw” (also called the Archimedean screw or screw-pump). Archimedes lived from about 287 to 212 B.C. in Syracuse, Sicily. At the time, Syracuse was an independent Greek city-state with a 500-year history. This is the device that some researchers have postulated is the invention that was used to irrigate the Hanging Gardens of Babylon, one of the Seven Wonders of the Ancient World. This Machine is the first known apparatus that was designed to transmit something continuously. Screw-pumps were the first known machines to perform a repetitive function, moving product from location A to location B. Treadmills are essentially the same, except that the runner or item being conveyed is always being transferred in one direction—forward.

In the 17th and 18th century, early rudimentary conveyors were used to transport grain and other agricultural by-products. These conveyor belt systems consisted of a leather or canvas belt stretched over a flat wooden bed. Later, leather and canvas belts saw decline when the rubber and plastics industries grew and began to produce less expensive alternatives. Elementary conveyor belts served as models for America’s engineers, who would develop similar, large-scale conveyor components for industrial manufacturing. Some early conveyors were used to unload materials from railroad cars.

Then in 1908, H. Goddard of the Logan Company received the first patent for a roller conveyor. But it was not until America’s automotive industry found success that industrial conveyor belts, the forefathers of the treadmill, became more widely used. 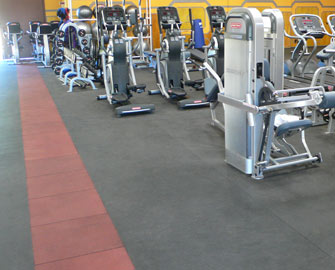 Frederick W. Taylor was an engineer in the early part of 20th century. His work on efficient scientific management was widely espoused by capitalists and Marxists alike. His work was based upon the “importance of conserving our material resources” and achieving “greater national efficiency." Taylor insisted that his ideals were for the greater good, and he viewed corporate management as a means to “secure the maximum prosperity for the employer, coupled with the maximum prosperity for each employee.”

In America, these ideas of maximum efficiency were fused with an emerging need for mass production. Individuals like Henry Ford adopted this mantra in the production of automobiles. His main goal, later called Fordism, was "the eponymous manufacturing system designed to spew out standardized, low-cost goods and afford its workers decent enough wages to buy them."

Therefore, the grandfather of treadmills (i.e. large conveyor systems) became a large-scale apparatus in that it was in high demand in America’s factories. The need for automation demanded that conveyors evolve to meet many large factory requirements. Conveyors have since become an integral part of manufacturing and the transfer of goods. Factories, airports, bakeries, and other commercial entities that intend to produce or move products efficiently now use conveyors and conveyor belts to produce the best possible products for their customers.

With the growth of the automobile industry came increased demand for rubber tires. During the early part of the 20th century, rubber tires were developed mainly out of natural rubber or latex derived from rubber trees. The hunger for rubber even drove Henry Ford to carve out a portion of the Amazon—which he named “Fordlandia”—in order to develop the land for rubber production.

“Fordlandia” ultimately failed, but the demand for rubber tires has not decreased. Neither has the discarding of used tires in landfills and dumps. Luckily, the rubber industry has found a new solution: recycled rubber tires and TDPs (Tire Derived Products) are the source of rubber mats for treadmills.

The growth of the rubber mat industry has been fueled by the ever-growing number of used rubber tires sitting in our landfills. The need to recycle rubber tires, an automotive industry by-product, has led U.S. Federal and State agencies to subsidize the recycling effort. TDPs are the reason a rubber mat for a treadmill is as affordable as it is! The belt that covers the rollers of the treadmill is made with rubber, too. Although not likely, it is possible that the treadmill belt is also a recycled rubber product.

Treadmills owe their modern designs to early 20th-century automotive institutions. Although treadmills can be dated back to Ancient Greece, I like to point to H. Goddard, Henry Ford, the City of “Fordlandia,” and Detroit as the inventors of America’s treadmill and, by extension, rubber treadmill mats. Automotive industries continue to demand rubber manufacturing today while other industries, like the military, have benefited from its advances as well.